Neither Mark or I had been to OFD 3 before so we were both looking forward to an exciting trip after hearing stories of crazy traverses, pole bridges and awkward climbs. Martin had offered to be our guide with the hope to capture a few good photos along the way and having caved with him before I knew we were in good hands.

The walk up to top entrance was definitely an incentive to get underground, wet, poor visibility and the ground so saturated streams of water were flowing down the path. We knew this meant we would not be able to get into the streamway for the last section to Smith's Armoury but there was plenty to entertain us beforehand.

We took the usual route towards Gnome passage and off towards the Corkscrew. From the corkscrew up the muddy climb and beyond was all new to me. We followed the passage and descended into Arete chamber via an easy climb at the side of the waterfall. From here it was a straight forward walk/crawl to Timo's Table with the alternating turn tip that Martin gave.

Our next significant feature would be the Pouched Egg. I was ambivalent about seeing this as a friend from SWCC had fallen from here. Mark and I chose to tackle this obstacle slightly differently to Martin. The normal technique is to use the boulder to balance yourself as you step across. My short legs and arms meant I couldn't reach the boulder let alone step across so I gingerly climbed over the top and used the "Eggs" to lower myself on to the next level.

From here we made our way to the Crevasse. Mark rigged the handline down to the ledge where there was a short traverse to the ladder pitch. Martin pointed out that from here the feel of the cave changes and on seeing the scale of the passages I could start to see what he meant.

Before we got to The Shambles there was a traverse around a corner that is probably the hardest part of the OFD 3 trip. Martin went across first and just watching him I realised that I could probably reach both walls with my feet but at full stretch my arms would not. Mark dropped down and scouted out a route up at the other end with plenty of good hand and footholds and we both climbed on up.

After climbing over The Shambles now came the traverses! Aside from the huge drop below these were not what we were expecting at all, plenty of convenient ledges for hands and feet. Martin announced the end of the traverses and our response was "really?" I think if we hadn't of done the Marble Showers traverses beforehand they might have made more of an impact. Still fun all the same!

The next obstacle awaiting us was an awkward climb down. It has a slight overhang but the awkward aspect of it is the smooth calcite covering it, combine this with PVC and you could slide a bit too quickly over the edge!

Just before our turnaround point there was a slot in the floor which dropped down into a rift. There is a conveniently placed boulder which you can traverse to before dropping to the floor just remember to turn around and continue in the direction you were originally heading which will take you to a waterfall and the drop into the streamway. After posing for a few photos under the waterfall we headed back.

I thoroughly enjoyed how varied this trip was and would definitely recommend it! Next time hopefully the water levels will be lower and we can make it to the end as the only thing missing was a good splash about :p 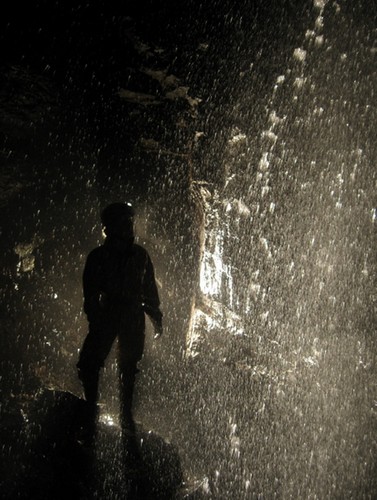 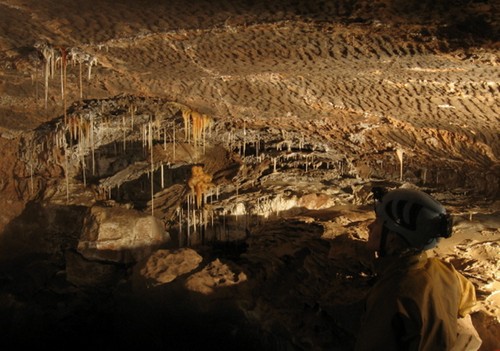 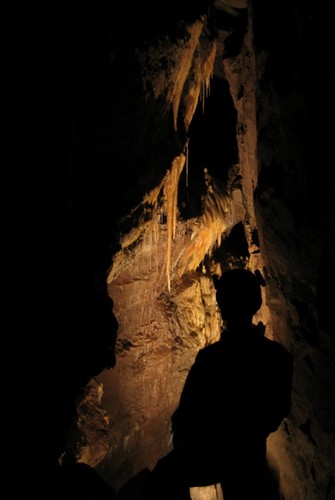